My hubs and I spent last weekend in New York City.  We went specifically to see a concert on Friday night and planned to spend Saturday walking around and checking off all of the “must see” items on our itinerary.  We lucked out weather-wise; Saturday was 28C and the nights stayed warm.  I could go back to New York again and again (and probably never do the same thing twice!).  There is always so much going on.  New York is one of those cities where the things to do, sights to see, places to eat/drink seem endless.  Everyone has their favourite areas and neighbourhoods.  It can be hard to fit everything into one weekend (my hubs and I are already talking about booking another weekend in NYC next year).

From a transit perspective, New York’s subway system is probably the easiest way to get around (aside from walking…); you can get to pretty much anywhere in the city.  Each ride costs $2.75 (as of September 2019).  Your first ride will cost $1 more for the MetroCard – don’t lose that card.  It’s reloadable and transferrable.  Unfortunately, you can’t buy a weekend or day pass for the subway; you just have to pay per ride.  The other way to get around would be Taxi’s or Ubers, but keep in mind traffic and build quickly.

Here’s how to spend the weekend in NYC:

This place fills up quickly and they don’t take reservations, so I would suggest getting there as early as possible.  It has a Mediterranean-inspired menu and won’t leave you feeling overfull.  I would recommend either the Mediterranean Breakfast or Poached Eggs with Grilled Holloumi.

Greenwich Village and the Friends’ Apartment

A five minute walk from Jack’s Wife Freda in the West Village is the Friends’ Apartment located at Bedford and Grove Streets.  It’s the 25th anniversary of Friends and if you’re a fan of the show, this is such a fun photo-op.  Keep in mind, however, that this is an actual apartment building so try to be a quick as possible.  After your picture, spend the rest of the morning wandering through the West and Greenwich Villages (in the morning it’s quiet and very lovely).

Hop on the subway (depending on where you end up in Greenwich Village) and head to Times Square.  There’s always lots to see and tons of shopping to do.  When they call New York City the city that never sleeps, they mean in!  Some stores in Times Square stay open to 1 AM.

Lunch – Picnic in the Park

Grab a slice of pizza or a deli sandwich and head into Central Park.  When the weather is warm, you’ll find locals hanging out on the grass with friends or even working on their tans.  Central Park is huge and there is so much to do – pick up a free map from either an information kiosk or a visitor center when you enter and then pick a path to follow and wander.  You can easily spend a few hours walking through park.

From Central Park take the the subway to ether WTC Cortland (1-2-3 Trains) or WTC (E Train).  The 9/11 Memorial is beautiful and moving.  Where each building stood it is now a fountain going 30 feet deep and surround each fountain are the names of those who lost their lives.  I saw a sign that said on each person’s birthday, a rose is placed on the name so they are never forgotten.  Spend as much time here as you need.

You can also head up to the One World Observatory (ticket prices between $32 and $45) for an incredible view of the city.

Head into Chinatown for dinner.  Chinese Tuxedo is a really cool restaurant located on Doyers Street (this street was known as The Bloody Angle and was once the deadliest street in the city).  I would recommend the BBQ pork bun, crispy short ribs, Chinese broccoli and vegetarian fried rice (my hubs and I found this was just the right amount of food for the two of us).

This is a plant-based restaurant serving veggies in all sorts of fun ways.  They are not strictly vegan, and do serve eggs (for those looking for more than just veggies…)  Sadly, my hubs and I never made it here on our latest trip, but that just means it’s on our list for our next visit!

Shopping and people watching on the Upper East Side

Walk over to the Spring Street subway station and take the 6-Train to Lexington Ave.  Spend some time browsing through Bloomingdales before heading two blocks south and 3 blocks west for some window shopping on 5th Ave and 57th Street.  Get your wallets ready!  Walk down 5th Avenue putting together your best Carrie Bradshaw outfit and looking for the best, “hello, lover!” shoes.

After window shopping on 5th Ave, head west one block to 6th Ave and end up at Rockefellar Plaza.  From there you can jump on the F Train from 47-50 Streets Rockefellar Center Station and take it to 4th Street / Washington Square Park.  We’re back in Greenwich Village and heading to the World’s Best Bar (2019).  Dante is a small cafe serving Italian dishes, but in small sharing plate-style.

It’s a 20 minute walk from Dante to Chelsea Market.  Head up Bleecker Street to Hudson Street, which then turns into 9th Ave.  Chelsea Market is located at 9th and W 15th.  Pick up a one of a kind / locally made souvenir to bring home (like a funky tee or tote bag).  If you a little hungry from the walk over, you’ll find not shortage of sweet shops.

The High Line is a raised garden/park area that was built overtop of an old rail line.  From end to end it will take between 30-60 minutes depending on how fast you walk, or how often you stop for IG-worthy photos.  You’re not trapped, though, there are a few exit/entry points along the way.

With a few locations throughout the boroughs, Westville’s popularity doesn’t seem to be slowing down.  On the healthier side of things (or healthy-ish), you can mix veggies with lean protein and not compromise on taste.  Last time I was there I had the marinated chicken with beets and brussels sprouts.  Everything was super flavourful.  Happy hour drinks included $6 glasses of wine.

After dinner head over to The Dead Rabbit Grocery and Grog (30 Water Street) for another well-crafted cocktail and cheers to your weekend in NYC coming to a close. 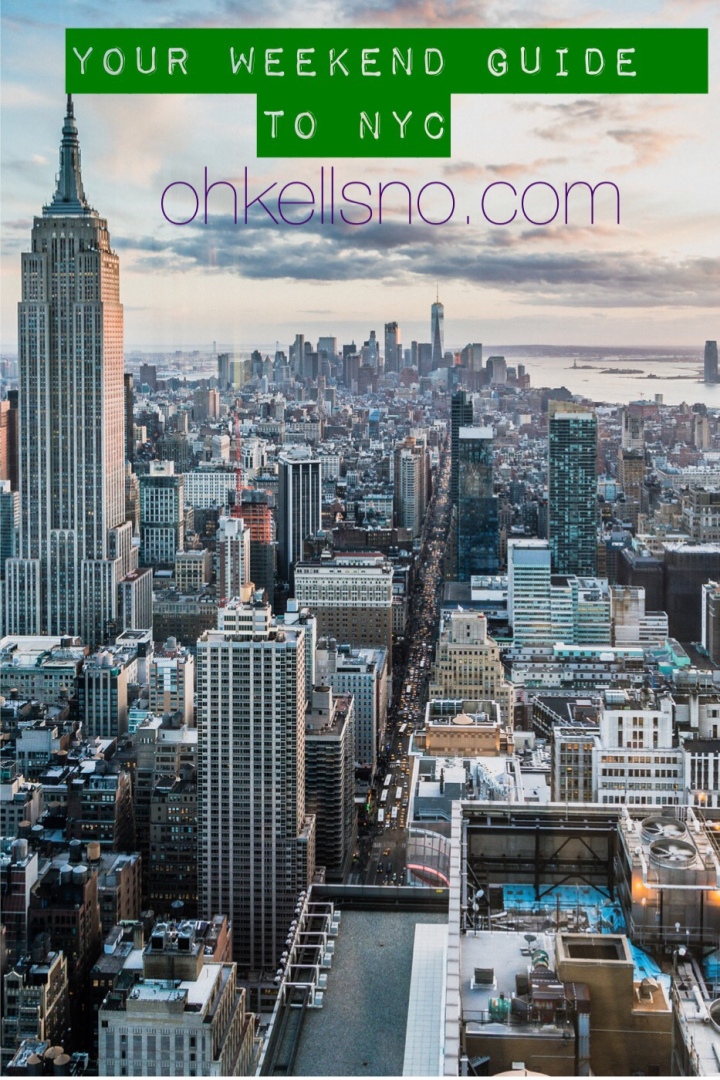 3 thoughts on “How to Spend the Weekend in NYC”